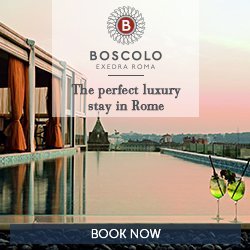 In the splendid setting of Piazza della Repubblica, between the Baths of Diocletian and the Basilica of Saint Mary of the Angels designed by Michelangelo, rises the first 5 Star Luxury hotel in Rome, opened in 2003.
The Boscolo Exedra Roma is the result of an extraordinary and accurate refurbishment and modern planning of a sumptuous late 18th Century building. 238 rooms, 2 scenic restaurants, a panoramic terrace with views over Rome, an exclusive spa and an efficient Business Centre, suspended over ancient Roman excavations. A refined and discreet atmosphere surround the guests and involve them in an experience capable of satisfying the most demanding of desires.