Welcome to The Astro Motel in our colorful corner of Santa Rosa, California. We look forward to having you as our guest. Built in 1963 in the heyday of the American motor lodge, The Astro was ambitiously remodeled into a 34-room urban motel in 2017, with original mid-century modern furnishings, a lush edible garden, and a passion for Sonoma County’s limitless offerings.

Described as a “gleaming midcentury masterpiece” by the Press Democrat on its opening day in January 2018, The Astro offers visitors to Sonoma County an affordable, urban, adventurously designed headquarters with 34 rooms and suites.

Originally built in 1963, the property was born again when members of the team behind the nearby restaurant The Spinster Sisters acquired it to further develop their overlooked corner of Santa Rosa filled with makers and doers. 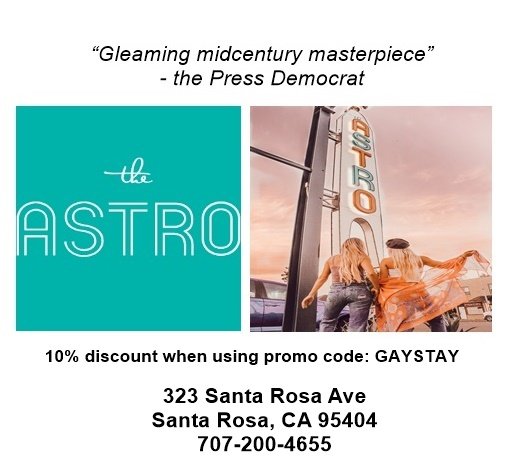 The Astro had been, for decades, a neighborhood blight, a rundown center for drugs and prostitution. Now, thanks to a thoughtful and ambitious remodel carried out by area artists and artisans, it stands brightly in the geographic center of a world class wine, beer, wedding and cycling destination that only recently endured devastating fires.

In the crisis weeks following the outbreak of fires, The Astro, not yet open, became a refuge for evacuees and since its October 27 opening it has been a FEMA-approved site for eligible fire survivors. The Astro will have its official opening January 18, 2018.

The Astro team is led by Spinster chef/owner Liza Hinman.

Liza Hinman has been part of the Sonoma County restaurant community since 2004. She was a staffer at Gourmet Magazine before attending The California Culinary Academy, subsequently working at Delfina and Bizou and landing the executive chef position at Santi. In the summer of 2012, Liza opened The Spinster Sisters. Under her leadership, the restaurant has earned a substantial following amongst locals, tourists, chefs and food writers. In the summer of 2017, the James Beard Foundation selected Liza from over 100 chef/owners nationwide for their Women’s Entrepreneurial Leadership Program.